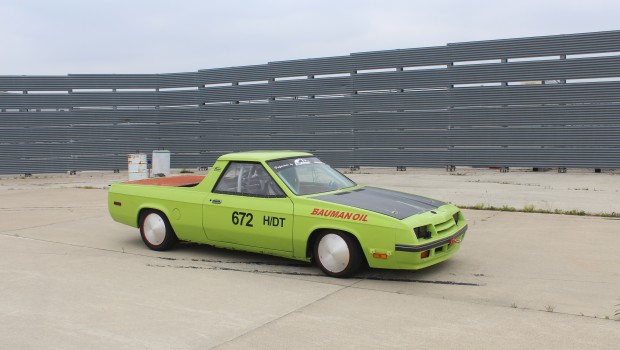 Dodge… If you are a fan of the good ole days the name might conjure up images of of wildly colored Mopar sedans with huge Hemi motors cruising up and down the street or eating up the drag strip a quarter mile at a bite. If you are’t a fan the name may bring to mind the atrocity that was the PT Cruiser, Neon, or everyones favorite to hate, the Caravan. Dodge has been all over the place from the peak of performance to the lows of the econobox. Like a drunken frat boy Dodge or its parent company Chrysler has had many strange bedfellows throughout its years which leads us to a one night stand with VW and Chrysler; the Omni.

In 78 Chrysler began sourcing engines for the Dodge Omni/Plymouth Horizon from VW in the form of a 1.7L gas motor with some changes made just for Chrysler such as a larger displacement (1.5 to 1.7L) bigger intake runners, different carb setup and a few other small changes. This motor was mated to a 4 speed 020 variant in some configurations and a Chrysler automatic transmission in others. This strange partnership would last for only a few years before the motor was phased out for a larger 2.2L engine, but it has left us with an interesting option for us to swap our VW diesel motors into after our original cars rust to pieces… The K-Car, or in this case the Dodge Rampage. 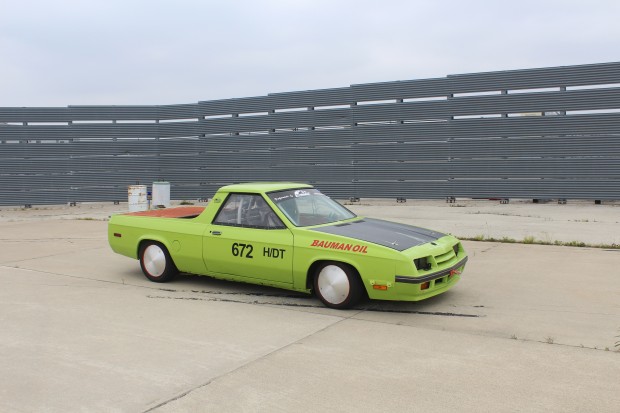 Steve is an easy guy to like with his high top Converse shoes, quick smile and easy laugh. After knowing him as ‘Facebook Friends’ only I got a chance to meet him at the ECTA Ohio Mile Track for the first time. An engineer by trade and a speed junky by nature Steve jokingly told me about how he got the Rampage. “I saw it on the side of the road left for dead by the owner so I stuck a note on it. A few days later he called me about it and I bought it.”

In its current form the Rampage finally lives up to its name. With a custom built 1.5L VW turbo diesel motor this Rampage has set several land speed records including the one he hit Saturday before I arrived at 135.6239mph for the Ohio Mile. The motor is a 1.5L IDI consisting of a 1.6 TD hydro block, AAZ head, Dieselmeken custom  built pump, Holset HE 200wg turbo and a little magic pixie dust for good measure. 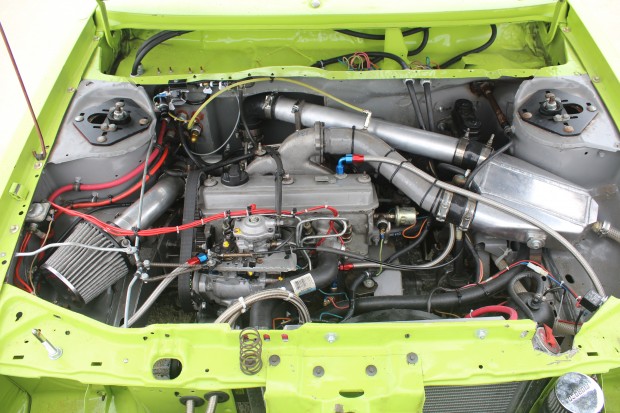 When my wife and son and I arrived at the airport used to host the event Steve and friends were in the staging lane waiting in line with fellow teammate Darrell Hake (who set his own record in a different class with a slipping clutch) fastened into the seat waiting his turn. Having never been to an event like this before I was unsure what to expect. I called Steve for a little moral support and walked down to the car like I owned the place. Much to my surprise nobody yelled at me. In fact the event was much more relaxed than I expected it to be as if it was a family picnic that just happened to have cars flying down the track at over 200mph at times.

Chatting with Steve and the other people with him about the car he offered to let me take it for a run down the track if I could make Rookie Orientation. My heart stopped for a few seconds, my eyes got bigger than any kid on Christmas and I think I peed a little bit, just a little.

Once I regained my composure I text my wife excited to tell her the news. Her reply was not quite as excited so I settled for just driving it around the parking lot afterwards. For those of you guys out there who might call me ‘whipped’ or some other less clean derogatory term my wife is my voice of reason for the most part and usually keeps me out of trouble (further proof will come in just a bit to prove this) so I tend to listen…most of the time.

The run was awesome. The sounds of a Volkswageny diesely symphony accented by the smell of diesel exhaust and enough black smoke to block out the sun for a few seconds. We watched a 1.5L TD Caddy that was a few cars behind us make its run and then we headed over to the pits to check out the truck up close and in person. 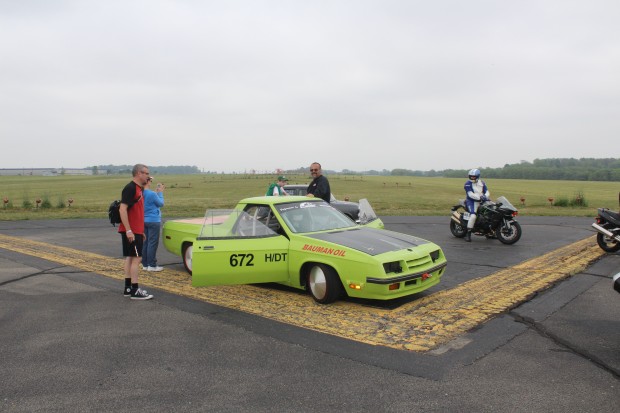 The truck is a pretty simple thing overall as far as race cars go. It has a few switches to turn on the fan and air to water intercooler setup etc and a couple buttons to operate the glowplugs and starter and thats about it. A Garmin GPS speedometer is adhered to the dash to keep track of the vitals and a boost gauge and tach adorn the dash. Oh, and the Go-Pro, gotta have the Go-Pro.

Climbing into the truck my first time was a real trick. I’m kind of a big boy and have the moves of  a top that has lost all of its energy and is about to fall over, but I made it in and that’s all that matters in the end. Steve gave me a primer on how to start it up and I was off around the parking lot. Driving it was familiar and eerie all at the same time. It drives just about like a normal VW diesel, until you goose the pedal and you get pushed backwards at a rate of speed you aren’t used to. Slamming on the brakes afterwards gave me a bit of panic too. The brake pedal wasn’t where it should be and my foot hit the floor instead. Looking down to see what was going on I noticed that the brake and clutch pedal had been moved over about 5 inches. The clutch was no big deal, but the brake mattered, quite a bit.

Feeling giddy while driving the truck around I would make mini runs in it not getting out of 2nd gear but still having fun with it in the space I had, and it was a 10mph parking lot. I can see how this gets under your skin and you get hooked. Maybe one day I will take a pass in it at speed…

Coming back to the pit area we were stationed at I pour myself out of the car as a few guys with us poke at me saying ‘the car is on fire, you have to get out as quick as possible. Hurry, hurry, hurry’. If thats the case, I’m krispy. 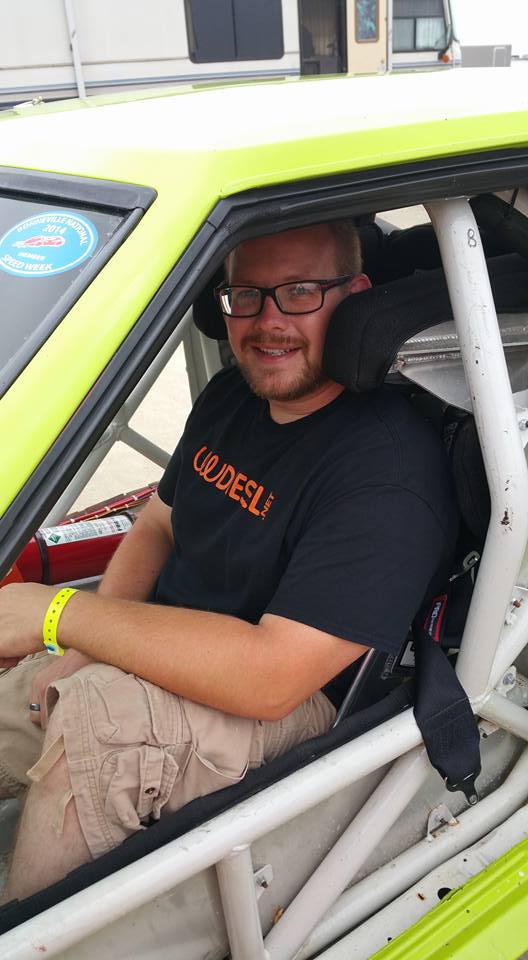 Before they go back for another run I ask Steve about getting some pictures of  the Rampage all by itself and Terry hops into the truck to help out. Being the cool guy that I am I hop on the trailer hitch (yes this race truck has a freakin’ trailer hitch) and smack the bed of the truck a few times so he knows I’m back there. Holding my 3 week old Cannon camera in my hand we set off to the other end of the parking lot to get pics. Terry didn’t hear me smack the side of the  truck and had no clue that I was back there (the truck doesn’t have a rear view mirror) so like any man would do in a hopped up diesel truck would do, he guns it. And hold on, for a second.

A colorful string of expletives passes through my head and I realize this is going to end bad. As I fall off the back of the truck and the phrase ‘Tuck and roll grandma, tuck and roll’ goes through my head as I smack the pavement. The camera goes flying in one  direction, my phone skids down the parking lot in the other direction. Where was my wife, my voice of reason, in all of this? She was in the car thinking what a moron I was. Thanks dear.

Picking myself up and inspecting my camera a chubby little kind on a 4 wheeler comes over to see if I was ok. Scratch that. He came over to add insult to injury. “Why would you do something stupid like that?” he ask me. My only response? “I’m stupid kid, don’t be stupid like me when you grow up.” That has to be some kind of PSA right?

Breathing a huge sigh of relief upon seeing that my camera is ok I hobble down to where the Rampage is parked with 2 skinned up knees and one skinned up elbow, pride laying back on the ground were I fell. The pictures? I’ll let them speak for themselves at the end of this. 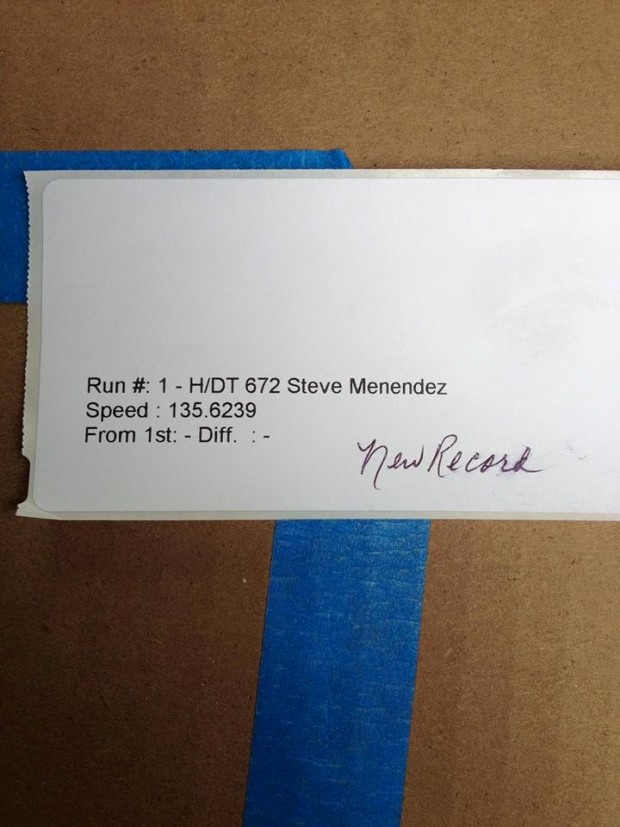 The last run of the day seemed to take forever to get to. Cars kept breaking down on the track and having to be hauled off and their mess cleaned up. My son was excited though because he got to push the Rampage like the big boys as the line advanced. The last pass of the day for the Rampage was made with a slipping clutch and a bottle of Coke poured onto the friction disc to help baby it along. Darrell Hake set another record in the truck after a class change at 117.1570mph on the Coked up clutch lending some merit to the old trick. And we headed back towards Indiana for a 4 hour drive with an exhausted 3 year old who was distraught over the loss of a Hot-Wheels car.

Reflecting back on the day it was more than I could have ever expected. Minus a screaming child and bruising my pride the day was pretty awesome. I got to meat a few forum members that I knew by name only and talk to some new guys to try to bring some fresh blood into the site. Saw some awesome cars and exposed my son to his first racing event. Special thanks to Steve and Darrell and the rest of the Salty Frog Racing team for letting me hang out with them and the folks of the ECTA for putting on such a great, laid back event.

Compilation video of the truck running

Exhaust eye view of the truck