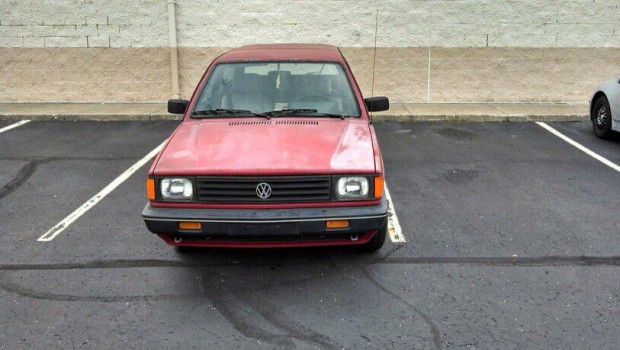 So this post will be a little different than some of the last ones I have done. I have a lot of VW stories, not all of them directly diesel related but still fun. I thought I would try to share some of them with everyone. If there is a positive response I will continue to share more of them from time to time.

I’m not exactly sure how I found this car the first time. It was an 88 Fox wagon, 4 speed, 1.8L, in pretty bad shape. I think it was originally on Craigslist the first time it ran across my path.

The owner had it at a Pep Boys in Indianapolis (about 75 miles from me) and it needed a timing belt or a tire or something like that and was only $400. I text the owner and tried to setup a time to meet him and buy it but someone beat me to getting up there so it passed through my hands. 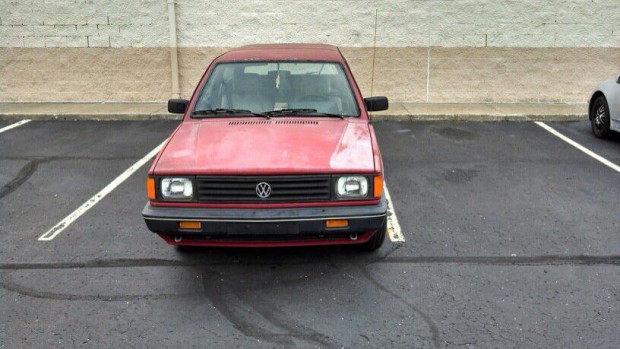 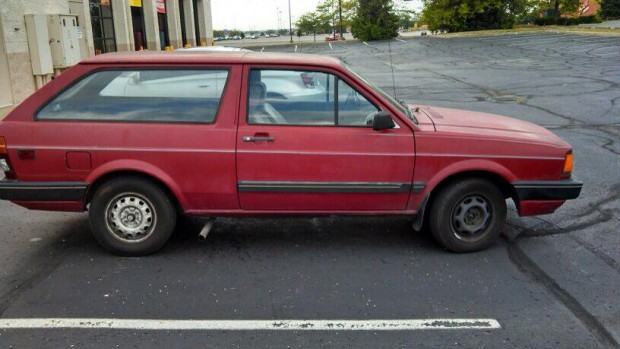 Months went by and I saw the same wagon pop up on a local VW facebook page where the new owner was having problems with it. They had made it carbureted I think and were looking to get rid of it. So I  tried to buy it again. (Hey it was a cheap Fox wagon. Those things are hard to find). No go on this try either.

Later I found it agin on Craigslist. Some Lincoln Tech students had gotten ahold of it and took the head off of it and had taken some of the interior apart, spray painted the wheels, thrown some new parts at it and left it sitting in pieces. The kid that owned it had to get rid of it because his apartment complex wouldn’t allow him to work on it. Once yet again I contacted this owner of the guy and we struck up a deal on it. I traded him a Mosin Negant that I had gotten in a trade for it. It was probably a $200 gun so I was making out ok on the deal.

Like I said though the motor was in pieces. The kid said the carb was back at his house and that he would mail it to me. The grille was painted with red Krylon paint. She was in sad shape, but I didn’t care. I finally had it.

I towed it home and bought a headgasket for it and some head bolts and waited for them to come in. Most everything else I had in my collection of parts. For those of you new to who I am I have about 50 old VWs at the house and about 3 buildings worth of parts. The only reason I don’t have more is because my wife  threatened to call ‘Horders:Burried Alive’ on me if I didn’t stop. So I just bought a second property and keep stuff there now and rotate out the collection, and she never knows. I’m kidding of course…maybe.

Three or 4 hours after the parts show up my friend Kevin and I have it back together and  running. It runs like crap because the carb I used came off my 72 Beetle that I had in high school and had been sitting for over 10 years, but it was alive.

We made plans to either convert it to propane since it was carbed or drop an AAZ in it and use it that way. -Those plans never came to fruition.

After driving it some and letting it sit more I decided it was time to sell the ole beast. I put an ad up on craigslist and it sat around for forever before I was finally able to sell it. It sold for a whopping $500, a self propelled push mower, a big ass PA speaker cabinet and 3 hunting knives. Random I know. But the kid was happy and was planning on road-tripping it.

Flash forward a year or so and I am trolling the same local Facebook group and see a motor a guy was giving away that came out of a project car that he was building. I’m all up for free VW stuff so I look at it, it looks back at me. Hey… that motor looks familiar. Thats the motor out of my fox! So I message the guy ‘Hey I would love to have that motor, it use to be mine and the carb on it is off my beetle from High School’.

In messaging back and forth he asks me if I want the transmission and running gear for it too. Sure I replied, I’l take anything. I had already had a friend looking for a Fox transmission for a car at this shop so I was pretty excited when he mentioned the tranny. I text my buddy and told him that I had finally found a tranny for the car and it would be $250. My friend was happy too, and I was making an easy $25o plus getting a free motor.

The time comes and I load up my trailer with this big plastic tote to hold the loose parts in it. I throw in an extra set of trailer lights, extra straps, and some tools. I strap it down with 2 ratchet straps and figure that was good and set off to pickup this motor and tranny.

Stopping for a soda about an hour into the trip I realize that the storage tote had vanished somewhere along the tip, probably on the horrible construction zone full of  potholes I had passed through earlier. Great. I was pissed to say the least, but that’s life.

I make it up to the guy’s shop to pick up the stuff. We get to talking about the car and about me owning it. He was doing a full 1.8T Quattro swap in it out of an Audi A4. The whole engine compartment was cut to pieces and the Audi Frame rails and mounts were being welded in. The rear was all cut up and being prepped for the rear subframe and associated bits. They were going all out with this thing. Bits of the Audi were laying everywhere as if it had been blown to pieces and left to die.

Here’s where it gets fun. The guy who was working on the car now was the original owner from the Pep Boys parking lot from the first time I saw the car. Wild huh?

He was moving down to Florida and couldn’t take the car with him because it needed work so had to get rid of it fast. We couldn’t figure out if he bought it off of the guy I sold it to or off of the next guy in the list but in about 2 years time that poor Fox had been passed around like a… well.. use your imagination here in relation to an affordable female companion.

I told him to stay in touch because I’d love to see how it looks done and headed to my friend’s shop. We shot the bull for a bit and I got a check and headed back home thinking what a small world it is sometimes.

You can see it barely beside the silver beetle. I had way too many wagons at that time. Not pictured was my wife’s Allroad too. 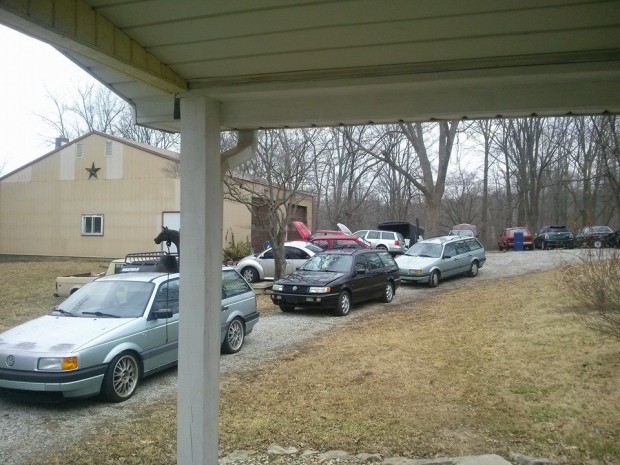