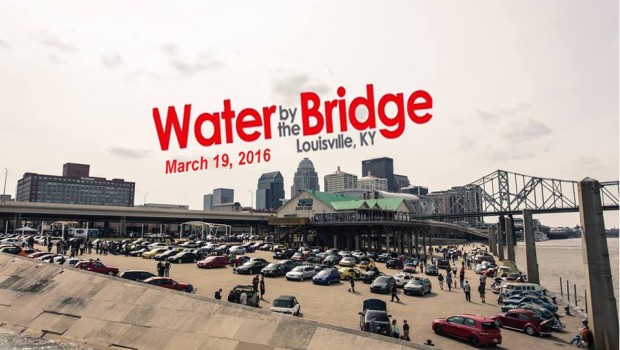 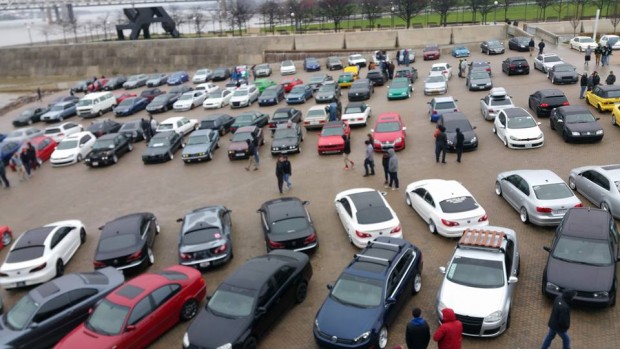 Winter is finally fading away and car show is ramping up into full swing. Kicking off show season for me was Water By The Bridge in Louisville Ky at Waterfront Park. The show has been around for years put on by Grossman Tuning, but this year it is under the stewardship of SoWo Partners, the guys behind SoWo and now the European Experience.

This show was special for me because it was the first time that I would have a booth for VWDiesel at a VW show, and I was kind of nervous.

For 2 weeks prior to the show I had been working to get my 1963 Mercedes Unimog 404 ready to take to the show. Yea I know its not a Volkswagen, and it isn’t diesel either, but its a freaking Unimog so it gets a free pass. Plus I had to figure out what I was going to do for the booth and get some VWD merchandise ready too. 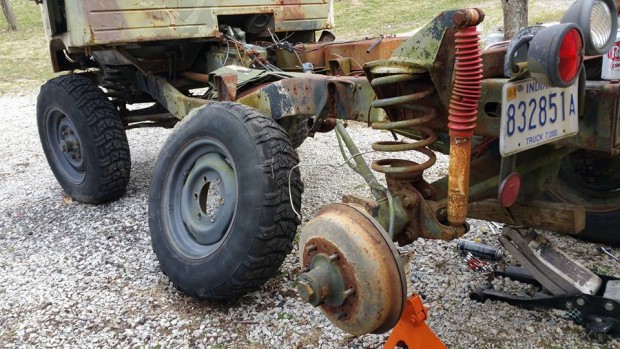 The Unimog went pretty easily. I had a few rear brake lines to replace, a wheel cylinder to rebuild, the carb to overhaul and ignition switch to fix. Unimog parts can be kind of hard to find but places like Expedition Imports make it a lot easier. If they don’t have it chances are they can find it. Parts were ordered and came in so I started throwing them on.

The funny thing about 50 year old brake systems is they like to be rusty and brake if you look at them cross-eyed. I managed to mess up a brake fitting and had a bleeder screw brake off on me (not bad only one broke) so more parts were ordered, but much cheaper this time.

While waiting for the brake parts to come in I tackled the ignition switch and carb. After sitting for 8 months or so the generator on the Mog decided it would start smoking once I charged the batteries up and turned it on. And it smoked pretty good too. I threw 2 bottles of water on it and it just boiled them off. Great, time to pull this beast.

You would think that in a vehicle as big as this and with as little amount of crap on it it would be easy to work on. You would be wrong. There is just enough room for you to want to punch a kitten. Or a German engineer. The generator is held on to the mount using almost an inch wide hose clamps, marvelous idea. Plus it is like 18 inches long and weighs like 30 lbs. Its a beast for something that only puts out 300 watts. It was a pain to wrestle out of the engine bay through a maze of hoses and pipes. I’m done bitching now…

I got the Mog done the day before the show and loaded up on to the trailer with all of my junk. It was a wonderful 70 degreese in southern Indiana and show day looked promising. 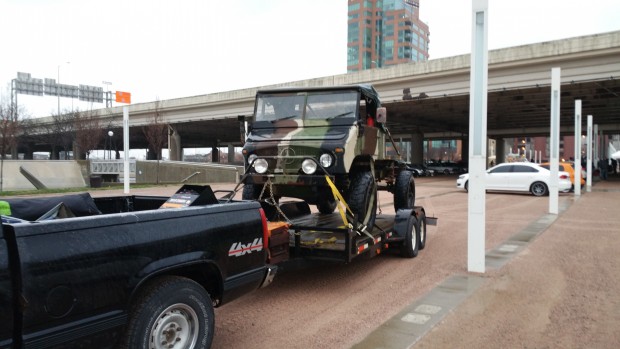 Saturday came and it was rainy and cold. Driving down to the show was slow going in my 89 Chevy pickup towing the fat mog at like 3.5 tons not including the trailer. Fifty mph was about top speed for me but we made it down there in one piece picking up my buddy Kevin along the way. I also had friends coming down from Chicago bringing their vehicles so the booth would be sure to draw attention.

Jesse brought his diesel powered Grumman Kubvan while Jason brought his hand made 1.6d powered rat bike on air ride. Throw the Mog in with it and we had lots of people stop by the booth to talk to us.

I had to add another 5 gal of gas to the mog to unload it from the trailer and get it to the booth. I swear this thing gets gallons per mile and not miles per gallon with the carb messed up.

We set up next to the guys at FixMyVW.com and started putting VWDiesel shirts and stickers out on the table… which began to fly away in the wind and the rain.

Being that this was my first time having a booth I was a little bit nervous at making sure everything went off right and I had everything covered. But I forgot to bring money to make change with, so I had to run up to Joe’s Crab Shack and see if they would break some 20s for me. 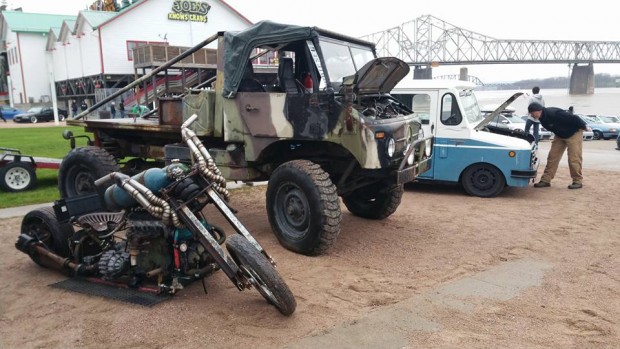 Show turnout was great considering it was like 35 to 40 the whole time and rainy. There were close to 600 cars there and they had to start turning some away because they ran out of places to put them. There was everything from Aircooled Beetles and Buses, a whole slew of Mini Coopers under the crab shack, a Lamborghini Countach which beat the Mog out for ‘Best Other Euro’ class.

There was an awesome selection of older BMWs including a RHD e30 wagon and super nice e21. Another friend of mine brought in some homemade moonshine and was kind enough to share down in his Vanagon.  A Harlequin MK3 Golf was always a welcomed sight, as was the e30 M3. There was also your standard collection of stance kiddie cars and cars that were just there to be there, but a good time was had by all regardless of what you brought to the show.

The carb was still messed up on the Mog even after cleaning and overhauling it so I wasn’t able to get above Granny 2 on it or it would bog down and die. Balls out in Granny 2 you get a blistery 6.3mph. Rolling down to the waterfront to take pics everyone stopped what they were doing to watch. The hipsters even stopped sucking on their vapers momentarily  to see the beast crawl past them with their man buns flapping in the wind. I got a lot of waves and thumbs up as people strolled past me. I know its kind of lame, but it felt pretty awesome. Like the homecoming queen in a parade. A big ugly homecoming queen in Krylon camo in a wheelchair, but cool none the less. 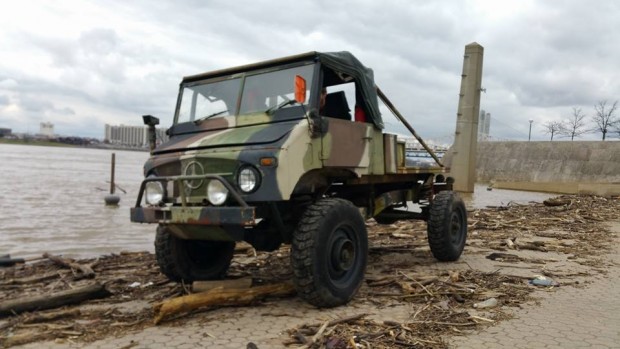 I think she looked pretty cool sitting down on the waterfront. I really wanted to take it into the water some, but I was afraid to with the carb acting up that I wouldn’t be able to coax her back up out of it. Going back uphill to the booth I was relegated to Granny 1 trying not to let her die. 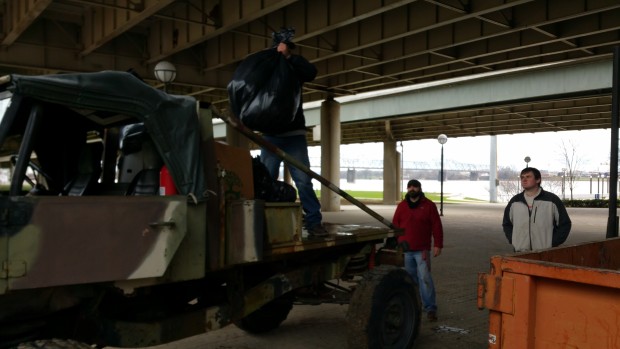 All in all it was a great show to start off the car season. WBTB has always had an atmosphere of comradeship and good times and this year was no different. Even with the cold, rainy weather lots of die hard European car enthusiast showed up for a great time. After the show was over I got to put the mog to work and drive it around picking up trash. I’ve never had so much fun taking out the trash. Special thanks go out to John Grossman of Grossman Tuning and Matt Bounds of SoWo Partners and the countless others who worked hard to put on a great show.

Afterwards we all headed across the river for dinner before Jason and Jesse headed back towards Chicago. After stopping at 4 places with an hour long wait we settled on Denny’s and clogged up the back of the Denny’s parking lot with our motley caravan and hoped we would warm up. 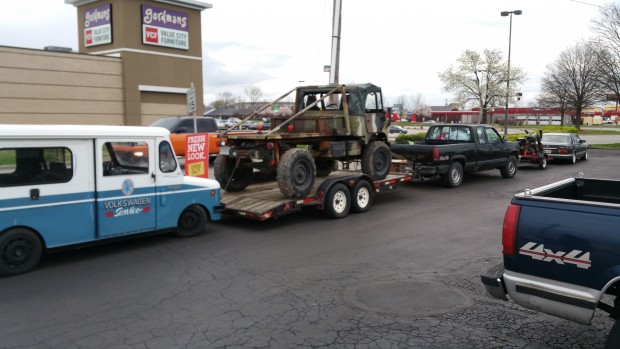 Now on to the pictures.